Engineering and Supply for Industrial Projects

For Perantech, sintering technology is essentially a heat-based agglomeration process for fine iron ores. A sintering plant consists of a series of sequential operating units, with the sintering machine being the central element.  This in turn is composed of individual machines such as screens, mixing drums, ignition furnace, exhaust fans, electrostatic precipitators, sinter cooler and material handling, which can be designed and supplied by Perantech. The raw materials, consisting of various materials such as iron ore fines, coke breeze and waste materials, are metered and conveyed to a mixing system. In a rotating mixing drum, the raw materials are mixed after the addition of sinter residues and water, which is also known as nodulation. After the mixing process, the material is loaded onto pellet cars that travel along the sintering machine.  In the process, they also pass the ignition furnace, which ignites the top layer of material and thus starts the sintering process. Ignition is maintained by an exhaust system that sucks the air from the pallet cars.  As the carriages move in a horizontal direction, the sinter burns evenly vertically. Optimum results can be achieved when the ignition furnace, exhaust system and pallet car speed are perfectly matched. Based on years of experience, we can offer solutions to make the sintering process even more efficient. The sintered material is crushed by a hot sinter crusher and loaded onto a sinter cooler. There it is cooled by the supply of ambient air. The cooled sinter is then conveyed to a crushing and screening section for further processing.

The main task of an electrostatic precipitator is to remove particles from a gas stream using electrical energy. Its main components are: Gas distribution plates, discharge electrodes, collection surfaces and separators. Gas distribution plates, which consist of perforated plates, perform the task of dividing the gas flow evenly. The gas then flows through discharge electrodes, which are divided into fields. As the particles are positively or negatively charged, they are attracted to the collector plates with the opposite charge. Depending on the design, the collected dirt particles are knocked off (dry electrostatic precipitator) or rinsed off (wet electrostatic precipitator). In this way, over 99 % of the particles can be separated from a gas stream.

The sintering process requires various raw materials such as fine ores, fluxes, mill tailings, and return fines. They are mixed in the right proportions with the aid of weigh hoppers and fed to the first mixing drum via a conveyor belt. In this drum, water is added manually or depending on the weight of the material. By rotating the drum, an optimum moisture content of the basic mixture is achieved. This mixture is fed to a second mixing device to which water, flux and solid fuel are added. This creates small nodules or pellets which have a positive effect on the permeability of the sinter bed. The main component of these mixing drums is the cylinder, which can be driven via friction-generating support rollers or via a girth gear. Further support rollers and a structure are required to fix the cylinder. In addition to the inlet and outlet chute, a water spray system is also important.

The pallet cars have the task of transporting the processed material mixture through the wind boxes. They travel directly next to each other to ensure a continuous flow of the mixture.  The cars are built in such a way that they allow as much air as possible to pass through without losing any material. In this way, the ignition applied to the top layer of material can spread evenly to the rest of the material by the draught of air. This is possible because they have a sealing element that prevents air from being sucked next to the car. The main components of the pallet car are the pallet body with end casting, front pallets, pallet wheel and axles assemblies, side walls, insulation pieces, grate bar holders and grate bars.

Similar to a paternoster, the pallet cars travel continuously on the same track. After they have transported the material mixture over the wind boxes, the track makes a turn so that the pallet car is upside down. During this process, they unload the sinter ore and return empty to the starting point to pick up new material. The pallet cars are driven by the lifting and lowering wheel, which are large diameter gear cylinders.

As one of the most important aggregates, the ignition furnaces start the sintering process in a sintering machine. They are responsible for igniting the top layer of the raw material. As the ignited material is moved in sleds through a suction system, the ignition spreads evenly downward until all the material is burned, resulting in sinter. However, to achieve an optimal result, many parameters must be taken into account. Among the most crucial are the material specification, the speed of the pallet cars, the strength of the suction and the intensity of the ignition process. A variety of ignition sources are available in an ignition furnace. Any type of fuel, such as gaseous fuels (coke oven gas, blast furnace gas, mixed gas or natural gas, etc.), liquid fuels or solid fuels (pulverized coal) can be used.

In the production of sinter ore, the extraction of air from the pallet car plays a decisive role. Thereby, the required extraction pressure is continuously generated by extraction fans at the trailing edge of the main gas duct. The main duct itself is also connected to the individual wind boxes, which are located directly under the pallet cars. Since each individual wind box can be opened or closed, this, among other things, allows the sintering process to be influenced. To ensure that no material that could fall from the pallet trolley is sucked in, the wind boxes are equipped with double cone valves. These separate the particles from the air and guide the collected material back into the preparation.

At the end of the sintering machine's pallet car line is a hot sinter crusher, which reduces the sintered ore into pieces of less than 150 mm. Since the crusher processes material at a temperature of over 800°C, its design must be adapted to this harsh environment.  Therefore, it is usually equipped with replaceable fingers, protected bearings, water-cooled shafts, and rapid replaceability of the entire shaft assembly, including fingers, bearings, and end shields.

There are several types of sinter cooling, but the most common is the circular sinter cooler. Its purpose is to cool the sintered ore to a temperature below 120 °C to allow further processing. As in the sintering process, the material is transported in pallet cars, which this time move in a circle. Cooling fans generate cold air, which is blown into the pallet cars via an air duct to shorten the cooling phase. During this process, a lot of dust is blown into the air, so there is a duct to carry it to the electric dust collector. After the pallet car has made almost one lap, it travels over a curved dipp rail. This mechanism ensures that all the material falls into a discharge hopper 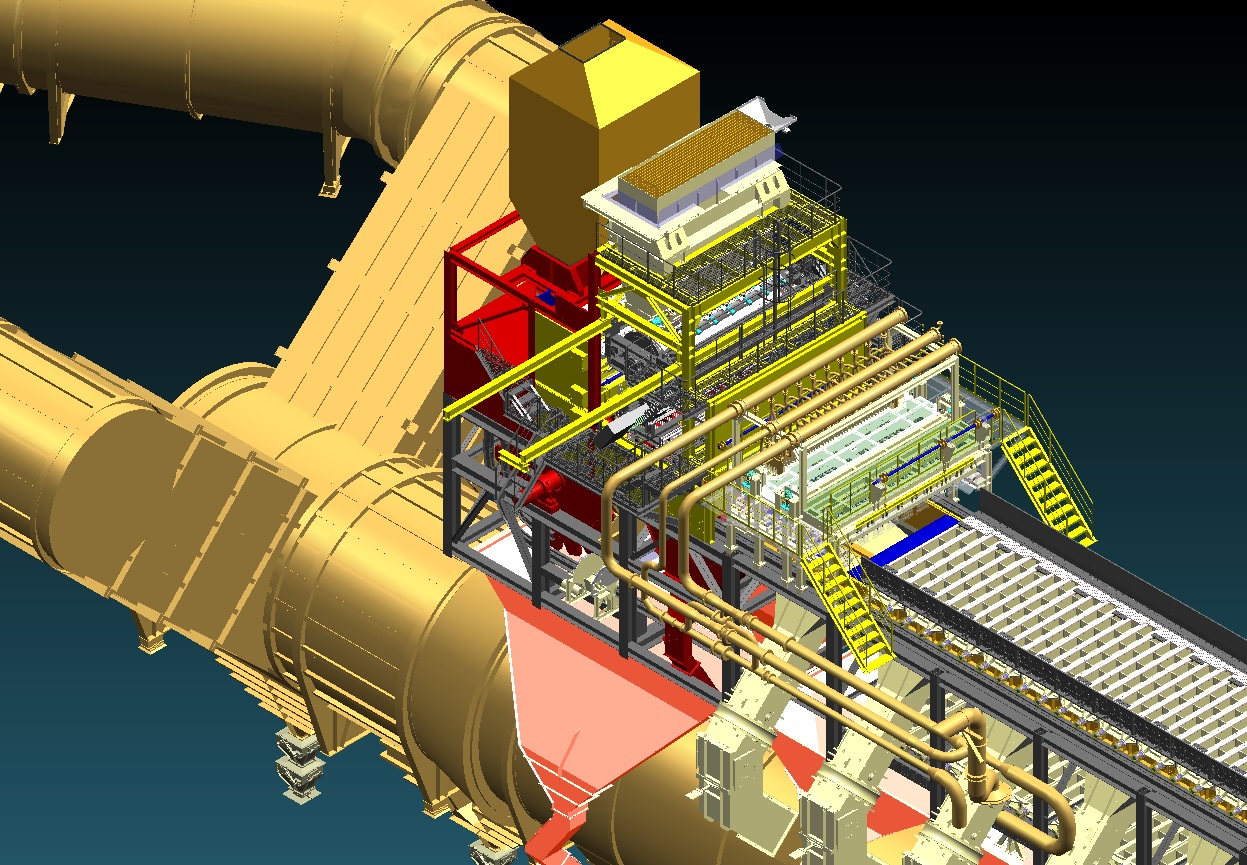